As one of Vernon’s oldest schools, St. James School is a landmark in our community with a rich tradition of faith and excellence in education.

St. James School was founded in 1956 by Monsignor John Miles, the Catholic parish priest between 1944 and 1971. It was Monsignor Miles who initiated and played the most significant role in the inception of the school and its infancy. There were many hurdles to overcome, including purchasing the land, persuading the Sisters of St. Ann to staff the school, and fundraising challenges. Yet Father Miles persevered with his vision and efforts “for our children”. Once he obtained the necessary approvals, he proceeded in an expert fashion with the building of the school. Plans were drawn up by a Kelowna architect and a professional fundraising company from New York was hired. A parish building committee of about one hundred men was established in 1955, chaired by Tierney O’Keefe and Hank Murray. It should be noted that Tierney O’Keefe’s father Cornelius O’Keefe, the first white settler in the area, was a Catholic, and the first Catholic Church was built on his homestead. St. James School opened its doors on September 10th, 1956, with 147 children enrolled. 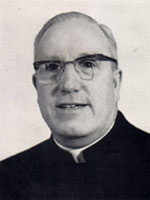 The original structure was built on one level and instruction was provided by the Sisters of St. Ann for Grades 1 through 6. The nuns made up the entire staff of the school in the early years, wearing full habit and providing firm discipline – the sisters earned $50 per month. In 1960, the first lay teachers joined the staff. In 1962, registration was broadened to accept children of other Christian denominations and increased numbers of First Nations students. The opportunity to attend Kindergarten at St. James School began in 1975. In 1986, the Parish Centre was added on to the south end of the existing school, providing a gymnasium for the school children and a venue for events sponsored by St. James Church, the Knights of Columbus, the Catholic Women’s League and others. Grade 8 students were accepted for the first time in September 1994, Grade 9 in September of 1995 and Grade 10 in September of 1996. The Middle School has since been discontinued but Kindergarten, and Grades 1 to 7 continue a successful operation.

The school has seen many changes since its beginning in 1956. Sr. Mary Rita Carey, the last nun to teach at the school, retired in 1997. Enrolment has diminished from its peak in the early 1960s – an issue also facing public schools in the region. Funding is an on-going challenge, but a decision by the provincial government in 1987 to give independent schools 50 per cent funding for operations provided a much-needed financial boost. The curriculum at St. James School is provincially recognized and uses many of the same resources as the public schools.

Motivated by a Christ-centred vision of humanity and human history, the school promotes the formation of the whole person. Such formation embraces not only intellectual but also physical, emotional, moral and spiritual dimensions of student growth. This broad education prepares students for the challenges of life as adults in our multi-racial, multi-cultural province. At. St. James Catholic School, students receive a strong academic education as well as a solid moral and spiritual foundation.

2006 was the 50th Anniversary of St James School 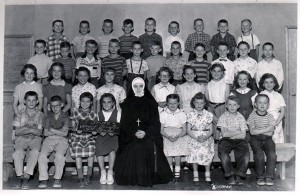 This week we celebrated our monthly Wednesday school Mass. Father Peter asked some very special helpers how to spell the word “Family” and told them what it stands for….”Father and Mother I Love You!”

February is the month of the Holy Family and it is good to thank God everyday for our loving families.

We also welcomed some special groups into our school on Wednesday morning as we hosted our second playgroup of the year and our Ready Set Learn program for our new Kindergarten students. We are thrilled to announce we already have 20 registrations for our September 2023 Kindergarten class….so if you know somebody wanting a seat please send them our way soon! Thank you to the Ready Set Learn team: Mrs. Routley, Ms. Wournell, Mrs. Hamm, Mrs Kelly and Mrs. Hamm for doing such a great job!

Australia day We always enjoy celebrating January 26 with our fellow Aussie Mr. Foster! Animal costumes, stuffies and green and gold were found throughout our hallways today. We are grateful for the balmy January temperatures to make this day even feel more authentic. There is a change in the weather pattern for next week though, so make sure to leave those board shorts at home on Monday!

Orange Shirt Day  Monday January 30 – Students and staff are invited and encouraged to wear orange shirts this Monday January 30 to honor the additional gravesites that were recently discovered in Williams Lake. Our prayers are with everyone affected by this devastating news.

PARADE PERMISSION SLIPS – Parents of Grade 6/7…please sign and return permission slips to the office by Tuesday next week so we know how many students are able to participate in the parade. This is a wonderful opportunity for students to be ambassadors for their school community!

After a long wait…the Grade 7 hoodies have arrived! There were cheers of joy when Mr. Foster presented the class with the long awaited parcel! We would like to thank the Grade 7’s and their parents for their patience with this order. The Grade 6/7 classes along with some parents took to the slopes of SilverStar on Friday and had a wonderful time. Thank you to the organizing teachers (Mr. Foster, Ms. Witteman) and an extra special thank you to Mrs. Kilarski who spent hours helping families register for their day at the hill!

Happy New Year! What a great week back at St. James School! There have been smiling happy faces as students reunite with their beloved friends and teachers. Our Wednesday Mass was spectacular and our Grade 6 leaders did a phenomenal job of leading the prayers under the instruction of Mrs. Witteman. We hosted our first playgroup session in 3 years thanks to the efforts of our former CEA Mrs. Julia Stroschein! We encourage all families to keep their eyes on our school calendar as it has been updated with all of the exciting events happening in the next few months.

St. James is committed to bully free schools - where every child is safe, accepted, and respected. Click the image below for more information.